A Quantum of Bollocks 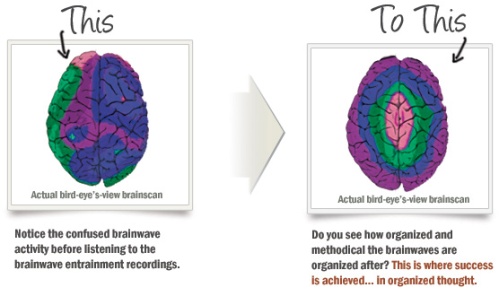 ‘Quantum’ has been one of the favourite weapons in the pseudo-science douchebag’s arsenal for some time now.  Back in the late 80s, Roger Penrose and Stuart Hameroff made a serious attempt to fashion a theory of consciousness that involved interactions between quantum-entangled molecules in cytoskeletal microtubules. At least, the authors seemed to take it pretty seriously, if nobody else actually did.

Of course, some neuro-snake-oil merchants have jumped on the quantum band-wagon, because… well… because quantum sounds all sciencey, I expect. Plus it has things called ‘leaps’ associated with it (even though that was really just a TV show about time-travellers) which sounds cool, too, right?

First up is a website called ‘QDreams’ with the achingly cheesy tagline “Success at the speed of thought!”. Their product is:

Riiight. Reading on a bit further reveals that the main man behind QDreams is Richard Bandler, one of the inventors of Neuro-Linguistic Programming, back in the 70s. NLP is a widely-discredited branch of pseudo-science that was popular back in the 70s and 80s among the self-help, motivational-speaking crowd.

I noted in my previous post that Brain Balance Centers seem to be just a re-packaging of some old ideas from chiropractic, re-packaged for the modern neuro-aware world. QDreams seems to be similar – the same old NLP neurobollocks re-packaged to sell once again to fit the current fad of ‘Brain Training’.

Another similar system is being touted over at quantum-mind-power-system.com. This system of ‘monaural and isochronic tones’ will apparently reorganise your brainwaves into a harmonious order and make you rich, successful, better in bed, etc. etc. blah, blah. Urgh. This site even has the nerve to rag on other brain training systems based on binaural beats, saying that they’re ‘just a brainwave placebo—it’s nothing but a sugar pill!’. Whereas their system is baed on ‘proven’ monaural beats. Hilariously they illustrate this point by waveforms of each type of sound, essentially making the point that monaural beats look different in terms of frequency spectra to binaural. Well, duh. This ‘quantum-mind-power system’ costs a whopping $232 for a few CDs and books filled with incoherent gibberish – what a bargain!

Both these companies earn a solid 10 out of 10 on the neurobollocks product rating scale, and both represent the same old bullshit, cynically re-packaged for a modern audience.

7 responses to “A Quantum of Bollocks”