Neuro-Linguistic Programming – the 1970s neurobollocks that just refuses to die 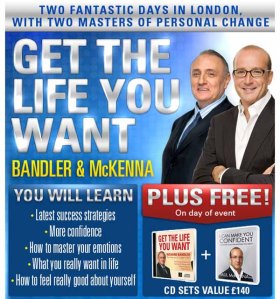 I’d prefer to spend two days in a Siberian gulag than with these two smug bullshitters.

Neuro-Linguistic Programming (NLP) was invented in the mid-70s by Richard Bandler (a psychology and philosophy graduate) and John Grinder (a linguist). It originally grew out of observations made in therapy, and a metaphorical extension of some of the concepts of Chomsky’s transformational grammar. In the fertile grounds of the 70s Californian therapy and self-help movement, it soon blossomed into a multi-faceted set of techniques and philosophies. By the 80s it was being widely touted as a novel therapy technique and attracted some serious attention from researchers. However it was relatively quickly understood that there was no empirical basis for its key claims, and as its practitioners began to make ever more outlandish claims, serious interest from professionals waned.

This didn’t stop the NLP-faithful though. People like Tony Robbins (who studied with Bandler) made incredibly successful careers out of the motivational speaking/books circuit.  Despite this undeniable popular appeal, NLP is nowadays widely-regarded as pseudo-scientific bollocks of a particularly refined and rarefied strain.

It’s actually quite hard to pin down exactly what the key principles of NLP are. This is partly because its founders and practitioners use such vague and amorphous language, full of metaphors and pointless jargon, but also because of the diversity of its supposed applications; from ‘traditional’ therapeutic settings, to sports coaching, to corporate training seminars, to (creepily) seduction. It aspires to include something for everyone; the best way to maximise the market and therefore the potential profit. One relatively common theme is focused on teaching communication skills in order to facilitate the learner’s personal and professional relationships. On the surface this sounds reasonable, but the communication theory that its based on has absolutely zero empirical support. The wackier variants incorporate all kinds of other bollocks like hypnosis, and many NLP-whackos talk about being able to ‘reprogram’ their own (and other’s) brain, often by claiming to influence the subconscious mind in some way.

Despite being nearly 40 years old, and a ridiculous, facile hodge-podge of concepts from psychology, philosophy, linguistics and new-age twaddle with absolutely no support from any reputable sources, amazingly, NLP is still very much alive and kicking. Bandler has kept on developing (and ruthlessly trademarking) a load of new techniques including ‘Design Human Engineering™’, or ‘Charisma Enhancement™’. A lot of his recent work also appears to include hypnosis. His website is essentially one big advertisement for his books, CDs and speaking gigs; and there are literally thousands of individuals, businesses, and ‘institutes’ offering NLP training for a bewildering variety of purposes and people. Bandler has even latterly jumped on the ‘Brain training’ trend with a new company called ‘QDreams‘ (‘Quantum brain training!’; ‘Success at the speed of thought!’ FFS…). Searching on Twitter turns up many, many people earnestly tweeting away about the benefits of NLP. Why is it so persistent? Partly this is because of Bandler’s clear talent for slick marketing, re-invention and dedication to innovative bull-shittery, and partly because NLP was never really clearly defined in the first place, which makes it highly malleable and adaptable to any pseudo-scientific new-age trends that come along. Despite a hiccup in the mid-90s (when Bandler tried to sue Grinder for ninety million dollars) it seems to be as popular as ever, and to be attracting new adherents all the time.

In my opinion the real stroke of genius in NLP, and perhaps the reason why it’s been so successful, is simply the name. These days we’re used to putting the ‘neuro-‘ prefix in front of everything, but back in the ’70s, this was way ahead of its time. Obviously there’s nothing remotely ‘neuro’ about it, though. Plus the ‘programming’ bit has a deliciously Orwellian appeal; promising the potential to effect change in oneself or others, if you just know the right techniques.

But effecting genuinely meaningful behavioural change in yourself is hard work. NLP derives from the quick-fix mentality of the self-help movement and is doomed to failure because of it. Does it actually help people? Perhaps, on some level, but any anecdotal results are almost certainly derived from a version of the placebo effect. Because of its vague nature, it’s not even really clear how its effectiveness would be meaningfully assessed anyway. Until we discover the genuine low-level programming language of the human brain we’ll probably always have to put up with this kind of bollocks being peddled.

There’s another really good article on NLP at the Skeptics Dictionary.