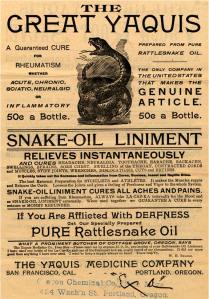 The achievements of modern neuroscience are staggering. We’ve learned more about the squidgy 1.5kg lump of pink stuff in our heads in the last 50 years than we did in the previous 2000 years. Looking inside our heads with technologies like EEG and fMRI is now a commonplace research activity and insights derived from basic neuroscience are beginning to have wider applications in medicine, technology, education, and even social policy.

However, this is not enough for some people. Some are intent on going even further beyond the limits of current research, and developing products, techniques and technologies which claim to cure dysfunction, make us smarter and generally improve our lives. What do we call these brave pioneers? Well… quacks, charlatans and sometimes even crooks, naturally. Neuro-quackery has a long and venerable history, at least since Ambrose Bierce (1842-1914) memorably described phrenology as “The science of picking the pocket through the scalp”.

There has been a resurgence of interest and activity around neuro-whatever businesses in the last few years. A good case in point is the current craze for so-called ‘brain training’ products, of which there are now hundreds. Some of these are simply harmless distractions and present themselves as such, others make big claims about boosting intelligence, curing conditions such as ADHD, or preventing age-related cognitive decline. Can they really do these things? On balance, the serious research suggests that no, they absolutely cannot.

What’s the problem, you may ask? Why not let people play their brain training games if it makes them happy? Well, quite right – if you enjoy them (and many people seem to), then carry on – it’s (probably) not doing any harm. The problem with these kinds of products though, boil down to a few key issues:

1. Money. These services are (mostly) commercial, designed to make money, ergo, people are paying for them, and some people are paying a lot for them. If they don’t actually work as advertised (or at all…) then people are wasting their hard earned cash and time.

2. Education. Related somewhat to point 1. above, in that schools are also apparently paying large amounts of money for these products. Ben Goldacre has written quite a lot about the ‘Brain Gym’ fiasco in UK schools on badscience.net. I urge any UK taxpayer to read these pieces, and then get angry that public money has been spent on such obvious twaddle, when it could have bought books, or musical instruments or new school buildings.

3. Broadly, it brings science into disrepute. Like all pseudoscience, many neuro-businesses clothe themselves in the appearance of scientific credibility while only paying minimal attention to scientific practice or methods. They use impressive words like ‘quantum’ and ‘plasticity’ and may even publicise research papers or scientific advisors with impressive-sounding qualifications on their websites. Unfortunately this means that ‘real’ science and scientists often get tarred with the same brush, and reduces the public trust in applications of genuine research.

So, what this blog aims to do is catalogue these neurobollocks-merchants, examine the evidence for their claims, and try to come to some evaluation of their merits.

Why neurobollocks? Well, it’s amusing, eh? For those not intimately acquainted with British English, ‘bollocks’ is a useful, multi-purpose expostulation that literally means ‘testicles’, but can also mean ‘bad’, ‘good’ or (in the current usage) ‘bullshit’. It’s a mild expletive though, such as might raise a tut of disapproval from a maiden aunt, or a mild frown from an elderly parson, over a slice of battenberg and a cup of Assam. Hope that clears it up.