The worst neurobollocks infographics on the web

Regardless what you think of infographics (and personally, I think they’re largely a pustulent, suppurating boil on the bloated arse of the internet) there are some good, useful ones out there. However, these are vastly outweighed by the thousands of utterly ghastly, misleading, poorly-referenced and pointless ones.

Because I’ve been on holiday for the last week, my levels of rage and misanthropy have dropped somewhat from their usual DEFCON-1-global-thermonuclear-war-the-only-winning-move-is-not-to-play levels, so I thought trying to find the absolute worst neuroscience-related infographics on the web might be a good way to top the vital bile reserves back up again. And oh boy, was I right. There are some doozies.

First up is this purple and blue monstrosity titled ’15 things you didn’t know about the brain.’ Here we learn (amongst other howlers) that the capacity of the brain is 4 terabytes, men process information on the left side while women use both sides, and: 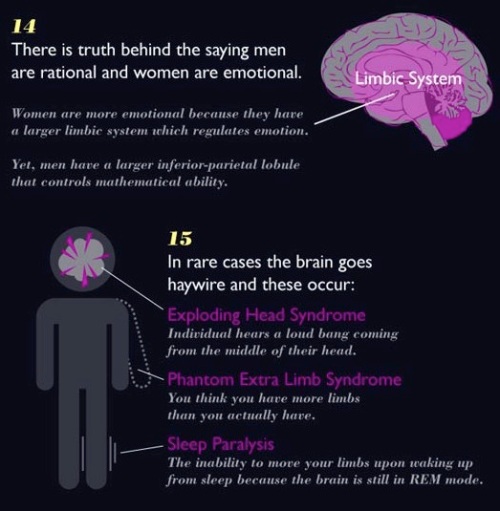 Women are more emotional because they have a bigger limbic system? Are you fucking kidding me? Also, it turns out that ‘Exploding head syndrome’ (also mentioned above) is a real thing, well… kind-of a real thing. Well, actually not really a real thing at all.

Moving swiftly on then, this one titled ‘The neurology of gaming’ is perhaps less laughable, but more dangerous in that it makes a lot of assertions without much to back them up. Nearly all the content here is currently pretty contentious and while some of it might possibly be correct, it’s all presented as fact, with no nuance at all, and only the most cursory attempt at referencing. It also has this brilliantly awful graphic at the bottom: 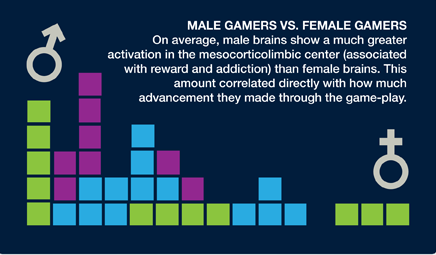 What are those little coloured blocks supposed to represent, exactly? Numbers of male and female gamers? Activated brain voxels? Absolutely fucking nothing at all?

The best (by which I mean, worst, naturally) brain-related infographics though, are related to the bullshit left/right-brain myth. This is the idea that some people are more ‘left-brained’ and others are ‘right-brained’, and this has some relationship to their personality, preferences etc., or the idea that some types of information are processed by one hemisphere alone. This is an absolute beauty, which manages (extra points!) to mix up some learning-styles nonsense in there as well for good measure. Amongst many other obviously made-up bits of foolish drivel, it claims that the right-brain is psychic(!), the left likes classical music while the right prefers rock, and the left likes dogs, while the right likes cats.

However, the top prize goes to this pitiful effort, which is chock-full of steaming great turds, but probably the best (worst) bit is reproduced below: 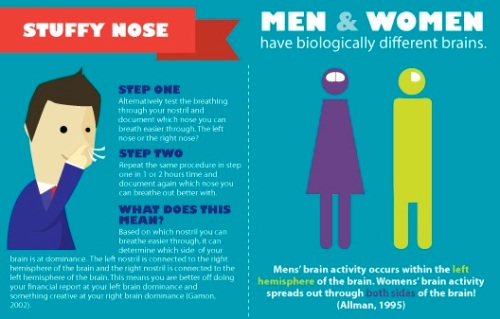 So, you can see which-side-brained you are by which nostril happens to be more blocked up, and men only have brain activity in the left hemisphere. Whoever wrote this deserves to be first up against the wall with a blindfold on when the neuro-revolution comes.

Just to finish on a positive note, while I was scouring the darkest pits of the interwebz to find these, I came across this lovely, helpful little comic about brain development, which manages to be informative, accurate and entertaining. Turns out good ones do exist after all, but infographics (like pretty much everything else) most definitely appear to obey Sturgeon’s Law.