I’ve written before about Daniel Amen and his network of Amen Clinics, that (amongst other things) give utterly unnecessary doses of radiation to children. To briefly recap, Amen is a psychiatrist, author, motivational speaker etc. who has built his reputation and fortune on performing brain scans and then wildly exaggerating their diagnostic and prognostic usefulness. His clinics use an imaging modality called SPECT, a largely obsolete technology with terrible spatial resolution that’s been superseded by PET and MRI for most clinical and research purposes. The only real advantage of SPECT is that it’s much, much cheaper to perform than either PET or MRI, which is, of course, precisely why he uses it. He’s been at this a while too. This article in Wired from 2008 contains some choice quotes:

“Let’s look at your scans.” He takes the images that he printed out this morning and puts them side by side on a large table. He points to several views of the surface of my brain. “What I see here is that activity in your prefrontal cortex is low at rest but becomes better when you concentrate, and your thalamus becomes more active, too. I think this means you have a predisposition to depression.”

I nod. Scrutinizing the scans some more, he says, “You need to be busy to be happy. Your brain is cool at rest. You need stuff in your life to feel alive, together, and connected.” He looks at another view, this one showing only the most active regions of my brain. “In this scan, you have increased activity in your thalamus, your two basal ganglia, and your cingulate cortex.” He picks up a pen and draws a line connecting these four regions to the right lateral temporal lobe. “I call this the diamond plus.’ It’s a pattern of angst, and we see it in people who have had significant trauma in their lives.”

And these are the scans that he’s supposedly looking at while making these judgements: 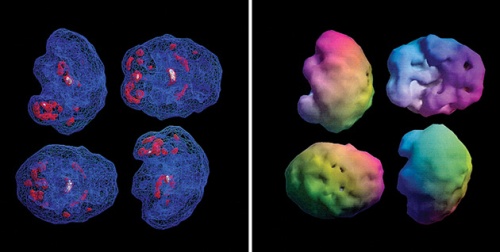 What?! You can’t diagnose conditions like depression in an individual subject from even the very best brain scans, and you certainly can’t see the effects of such nebulous existential concepts like ‘angst’. What the hell is ‘angst’ supposed to mean in this context anyway?! He might as well be saying “The connections between your Shatner’s Bassoon and the peri-sinovial labio-ventral cortex is unusually cromulent and this might predispose you to brilligness, and excessive slithy toveing.” So, yeah, he’s a colossal bullshitter, who must have to keep a fire extinguisher handy at all times to dampen down the constant spontaneous combustion happening in his pants. This is nowhere more true than in the adverts for his clinics. Here’s one from the clinics LinkedIn page:

Brains get significantly less lumpy-looking after treatment – good to know. But hang on – brains are lumpy-looking. They’re covered in ridges and bumps! These smooth-looking pretty-coloured brains that Amen seems to think are great actually resemble lissencephaly; a very serious condition where the developing brain lacks the normal cortical folds. In this case, I’m pretty sure that the smoothness of the images is produced by the fact that the SPECT imaging methods he uses are so poor that they simply can’t show that much detail of the cortical surface. Also, I’ve no idea what the pretty colour-washes are meant to signify, if anything. To show you how easy it is to create images like this, here are some I threw together in about five minutes using FSLView and a standard-space MRI template (the MNI152 1mm template, bundled with FSL), by varying the threshold of the 3D rendered surface:

I’ve written before about why presenting brain images out of context in this way can be extremely misleading. Here’s another choice Amen-sponsored example: 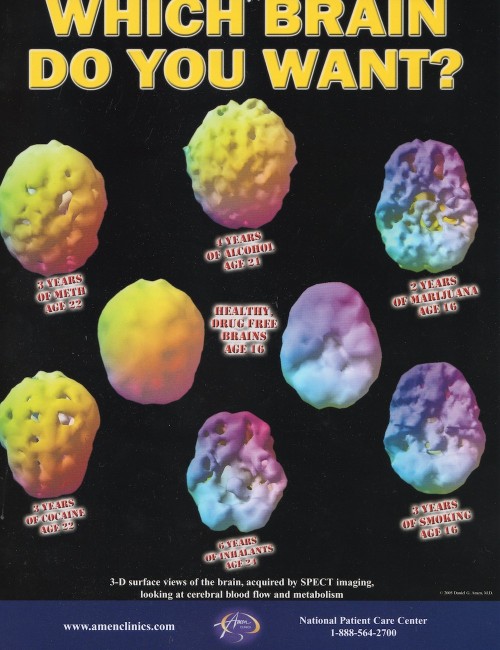 As if it really needed saying; utterly meaningless nonsense. A Google image search brings up loads more examples, but I won’t sully your eyeballs with them unnecessarily. Amen’s use of SPECT images in this way is a gargantuan 20-year effort in energetic turd-polishing of a staggeringly disingenuous and despicable type, and I’m frankly amazed that he still seems to have an active licence to practice medicine.

Many thanks to @CousinAmygdala (and others) who first showed me these kinds of ads, and who also coined the most excellent term ‘neurofearmongering’.

The impish Dr Amen, with (presumably) some fans.

Christian Jarrett’s article in Psychology Today (“Your 5-Step Self-Defence Program Against Neuro-Nonsense”) that I linked to in my previous post briefly mentioned diagnostic SPECT (Single-Photon Emission Computed Tomography) imaging, and the paper he cites (Chandler and Chatterjee, 2011 – open access – yay!) goes into some more detail about this particular brand of neurobollocks. After looking into it myself a little bit, I was absolutely stunned that some doctors a) had the gall to to continue offering these diagnostic methods and treatments to people, and b) that they were allowed to continue doing so by medical regulators (I guess that’s the USA’s free-market, laissez-faire approach to medical care – gotta love it!).

So, a little background. A common theme in neuroimaging research is attempting to identify differences in the brains between different groups of people. Male/female, musicians/non-musicians, schizophrenics/non-schizophrenics, whatever. This is all very interesting and worthwhile – if we can identify a common brain pattern or structure that is different in say, schizophrenia then we may be able to devise better treatments that target it. Voxel-based morphometry is one common method of looking at differences and assesses the relative size/shape of different brain structures, but there are lots of other methods that either look at anatomical or functional differences. The important point here is that you always need a group of people of each type that you want to compare. People’s brains vary pretty widely in the size and shape of the sulci and gyri, and in the amount/location of functional activity that you see in a given task. What is being sought in these studies is a reliable difference that is consistent across the group, and remains as a statistical effect, once all the (random) individual variation has been taken into account. Many people’s brains are a bit funny-looking, but 99 times out of 100 it’s just normal individual variation.

What this means is that developing imaging-based biomarkers that reliably indicate particular states or conditions in an individual is fraught with difficulty. Some progress is apparently being made in this endeavour, but a lot of people are still very sceptical about the idea, and rightly so.

However, Dr Amen, (of the eponymous ‘Amen Clinics‘) is certainly not one of those people. He’s been using diagnostic SPECT imaging for years, and has clinics in six major US cities. Dr Amen uses SPECT imaging to diagnose ADHD, anxiety, depression, addiction, autism, ‘marital conflict'(?!), and for generally healthy people who want to lose weight, or just ‘optimise’ their brain. How does taking a SPECT image of their brain help with this? It’s not really clear, but unsurprisingly, Dr Amen has a slick-looking brain-training-like program (‘The Amen Solution’) that promises all the usual bollocks, and an online store filled with his (many!) books, DVDs, etc. plus (of course) his own brand of dietary supplements. So, basically, I’m guessing that the results of the SPECT scans in his clinics typically indicate that the patient needs to complete a course of his brain-training, or supplements, or both.

Just to be clear – there’s absolutely no way that a SPECT scan of an individual can show up anything useful in diagnosing these disorders. Dr Amen is charging people thousands of dollars, and injecting them with radioactive substances, for absolutely no sound medical reason.

Why use SPECT? The spatial resolution of the images is crap, and no-one uses it for clinical or research work that much anymore. However, it’s the cheapest of the 3D imaging techniques that can show functional activation. MRI scanners are expensive to buy and maintain, and need fairly large facilities. PET scanners use short-lived radio-isotopes, meaning you have to synthesise them yourself and use them immediately – you need a team of chemists and a well-kitted out laboratory. SPECT uses off-the-shelf isotopes with long half-lives; much, much cheaper and easier.

Dr Amen is a funny one, to be honest. Unlike the Brain Balance Center charlatans , he at least has some medical training and certification, and he publishes some research papers, occasionally even in peer-reviewed journals. He may perhaps be a true believer in what he’s doing, which makes him less mendacious but unfortunately also more stupid. Of course, where one quack leads others will follow, and copycat clinics have sprung up, also using SPECT, and claiming similar things; Dr SPECT scan, and CereScan are two of them. Dr Amen’s slick, media-savvy approach (he seems to be a regular on those dreadful audience-whooping, self-help TV shows they have in the US) marks him out as a serious operator though. Because he has some appropriate training, and has published some research, the Amen Clinics only gets a 9 out of 10 on the Neurobollocks rating scale; I know, I know, I’m just too generous sometimes, it’s a problem.

You can read more about the radiant Dr Amen and his techniques here, and there’s also an interesting Q & A with him over on QuackWatch.